Q: When will the next JAM be held?
A: Each season, these dates are determined at the August Snowbelt Board meeting. In general, JAM Tournaments are held during a single weekend from Friday through Sunday in late February or early March. In rare unavoidable occasions, a particular location may need to begin their tournament on a Thursday night.

Q: When do we find out which location our JAM will be hosted at?
A: In order to create competitive JAM tournaments, the Snowbelt Board thoroughly discusses each tournament at the February board meeting, which is held less than a week after the end of the season. At the conclusion of that board meeting, your Snowbelt Reps will know which tournament all teams will play in, and which team is hosting each tournament. This information will also be posted on the Snowbelt website within 24 hours of the meeting.

Q: When do we find out the schedule and rinks our team will play in for our JAM?
A: The Snowbelt Scheduler will work with the hosting association Reps and JAM Directors to determine the final schedule for each tournament. All JAM tournaments should have the full schedule (including teams, dates, times, and rinks) posted once they are finalized, usually starting on Monday following the February board meeting. Some JAM schedules may take longer to be finalized.

Q: There isn’t very much time between the time we find out our JAM schedule and the time of the JAM itself. We need more time to plan the trip and schedule work vacations and to figure out our travel/hotel plans.
A: Unfortunately, this is true. The only way for us to continue to hold truly competitive JAM tournaments is to consider each team’s performance throughout the entire season (see above). Within a week of the end of the regular season games, we have all the JAM tournaments set and scheduled. This is no minor feat! In 2014 we adjusted the schedule to provide families with an extra week to prepare. We realize the notice is still relatively short, but we hope this works out better for your planning process while still keeping JAMs as competitive as possible.

Q: In order to make it to our first JAM game, my child would have to miss part of his/her school day. Why can’t we play the tournament outside of school hours?
A: In a perfect world no child would miss school for a JAM game. Unfortunately, many JAMs do not have full use of their ice for the entire weekend or are hosting multiple tournaments and therefore cannot follow the ideal schedule. When determining JAM schedules we do our best to avoid or minimize school conflicts by scheduling games for as late as reasonably possible on Friday. That said, some tournaments have to start on Friday morning or early afternoon and in some rare cases, Thursday evening.

Q: Why is it called the John Abbott Memorial (JAM) Tournament?
A: John O. Abbott was a past President of the Snowbelt league. A native of Skaneateles, he had also served as President of Skaneateles’ youth hockey association. John passed away in 1995. It was decided to name the end-of-season Snowbelt tournament in his honor. 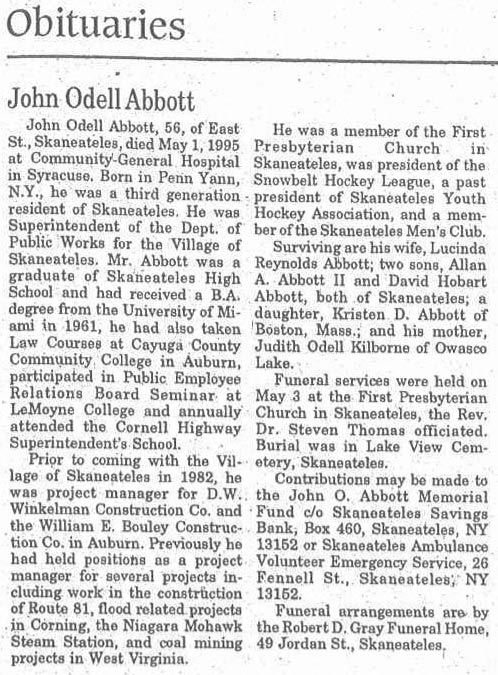